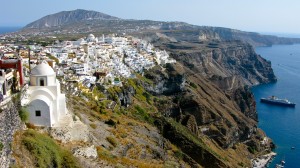 May 1, 2014
It would be nice if I could start off by telling you my name but, you see, I don’t have one. Not too many people give supposedly inanimate objects pet names (well, some who keep pet rocks might), especially way back in the 17th century B.C.E. when I was formed. Actually I’m a rhyton, an ancient pouring vessel in the shape of a ferocious but handsome (if I may say so myself) gold bull. People filled me with wine through a hole in my back and then tilted me so the wine would come pouring out through a hole in my snout.
It was a time when the people of the Greek Island of Crete (also called Keftiu, Caphtor, Kephtor and various other names through the ages) were under great stress as a result of earthquakes, one of the most explosive volcanic eruptions in the last 10,000 years on nearby Thera (Santorini), tsunamis, and all the rest. Some thought it was because they angered Poseidon, the Great Earth Shaker and God of the Seas. The reason I got fabricated was to have a beautiful symbol like me to appease that god and induce people to be more worshipful of him and all the other gods.
The details about what happened are described in Cavanila’s Choices: a Novel of the Minoan Cataclysm by Jesse Sisken, the first book of his proposed trilogy. It’s a story about a lovely, young, Minoan priestess who struggles to save her people from the effects of that disaster. But more of that later. What’s important for now is that it was Jenora, King Minos’s high priestess (she was also his mistress) who came up with the idea that I could do that job. But on the night she went to him with that suggestion, he put her off. He was more interested in getting her into his bed than in listening to what she had to say. However, he did like the idea when he heard about it the next morning and ordered his goldsmiths, Alkabar and his son, Alpada, to come up with a design for me.
The process wasn’t easy. The goldsmiths worked hard, disregarded a lewd suggestion made by Alpada’s younger brother, and finally settled on a decent design. But Jenora, bitch that she was, wouldn’t buy it. Over and over she kept telling them I looked too dull, that I needed to look more alive. I hate to say it, but she was right. Under her prodding and threats, Alpada, a real genius, came up with the idea of inserting red jewels into my eye sockets. That finally satisfied her. I really looked alive then, especially in front of a good fire that could make my eyes sparkle.
And what no one ever knew, until now that you and others are reading my blog, is that I also acquired the ability to see and hear everything around me, especially some pretty interesting events and conversations. Talk about being the proverbial fly on the wall. So, I’ve lots of juicy things to relate, but not all at once. Read my next blog in about a week.
Cheers,
P.S. Cavanila”s Choices has just appeared in print. See the Order page for purchasing information.